family-broken section of the county as this map of American family structure makes clear. The whiter  the state (in color below) the less intact the family. 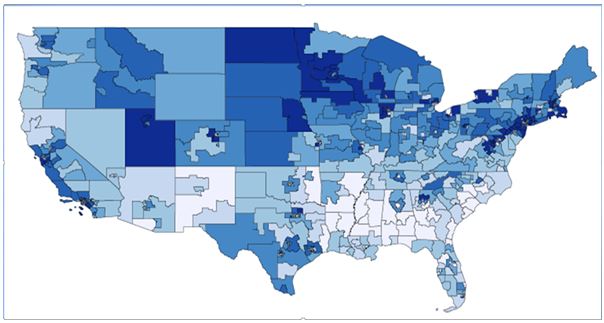 Think of the archetypal Southern man and strength and straight shooting (metaphorically speaking, though the other straight shooting come to mind too).  He is honest, tough, clear-speaking and loyal to his friends.  But the reality is most Southern men are not loyal to their children.  They don’t give them the family they need.  And even if there is a rifle in the back window of every truck shot gun weddings are as much an ancient memory in the South as anywhere else. The fault may lie deep in the cultural icon of frontier American manhood with its ambivalence about chastity, especially for the single man. Out of wedlock births are common, almost normative.   Even pastors seem to think nothing of it, and say less. We can have all the cultural debates we like about sexual norms and changing attitudes but the inescapable reality is our present patterns leave boys without fathers present, which gives us more young men without chests who are also cursed with small hearts.  And they in turn will sire more young men with even smaller chests and smaller hearts.  And their daughters: with absent fathers they will quickly find absent fathers for their own children. So we get double barreled single parenthood among their children. Such is the reality of the white states in the map above. The South needs a new culture, a new infrastructure: the man with a big heart who has the strength to make friends only with other men who are intent on bedding only one woman: the one each will marry, who will be mother to all his children, and who will likely bury him after a long and good life together. Is the South capable of producing such men?  Are Southern public schools capable of shaping the minds of boys in that direction?  Even more: are Southern pastors capable inspiring young men to such strength, or are they too without chests even in their own churches.  Can any of them talk about chastity as love and strength?  Reality screams for this course correction, else the South will die a natural death — a natural cultural death.  Where are these modern strong men?  We all need their stories but young boys need them most. All that religious worship needs to be harnessed.  Surely there are enough real men in the South to do so.]]>