Media outlets have been ringing with stories of domestic violence in the NFL: Greg Hardy, Rod Smith, Anthony Ray Jefferson, and, most recently, Ray Rice. But in its obsession with the NFL’s response to its players, the media has overlooked one growing root cause of abuse in these cases: cohabitation. Cohabitation is a breeding ground for domestic abuse against both women and children alike. And, not surprisingly, each NFL player was or had been cohabiting with the woman he beat.

This is, of course, not to blame any of these women for their abuse.  Rather, the link between cohabitation and domestic violence highlights the massive attitudinal differences between what it takes to cohabit and what it takes to marry. If the NFL wants to reduce domestic violence it will become a booster for marriage and it could do well by distributing these charts to all its NFL players and fans.
Social science data confirms this claim. One study found that cohabiting couples were more likely to face difficulties with adultery, drugs, and alcohol than couples who did not cohabit. Likewise, those couples who lived together prior to marring were more likely to exhibit marital issues like permissive sexual relationships and drug problems. Not surprisingly, therefore, cohabiting couples tend to have lower relationship quality, less stability, and more frequent and more extreme disagreements.
The frequency of abuse among cohabiting couples is especially alarming. The rate of violence among cohabiting couples is double the rate for married couples, and the rate for severe violence is almost five times as high. Cohabiters are more likely than married couple to be aggressive, and are more likely to hit, push, or throw things at their partner.
Having unmarried, cohabiting parents also poses a number of risk factors for children. Data shows that children of divorced or never-married mothers are six to 30 times more likely to suffer from serious child abuse than are children raised by their married biological parents. As the British data shows, children whose biological mother cohabits are 73 percent more likely to die from abuse than are children whose biological parents are married. We do not have analogous US data on fatalities, but we have very good federal data on rates of abuse as the other three charts show.
Many support cohabitation as a means to “test drive” a potential marriage. However, far from strengthening future marriages, cohabitation produces risk factors for a slew of marital problems like drinking, fighting, and violence. It’d be best if people stick to watching NFL players for their football skills, and take relationship advice from the experts. 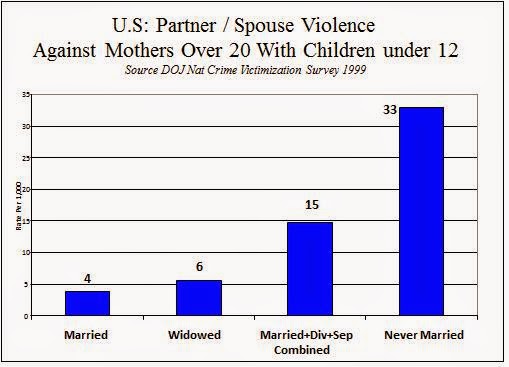 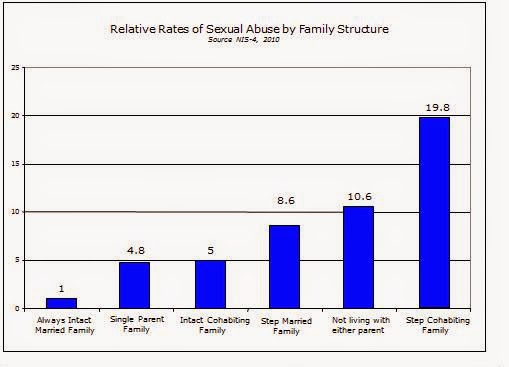 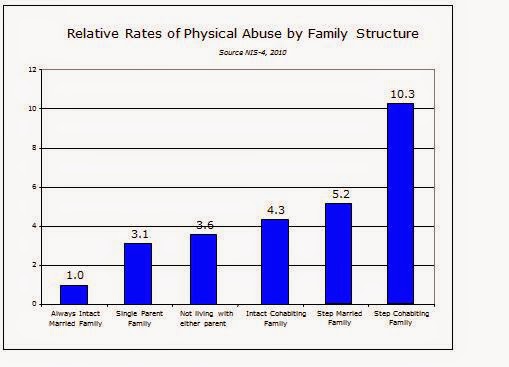