Not only Christian and Jewish but all great cultures rest on life-long marriage and cultivate it in their mores: Hindus most especially, but Shinto, Buddhist, Confucian, and, in the main, Muslim too. 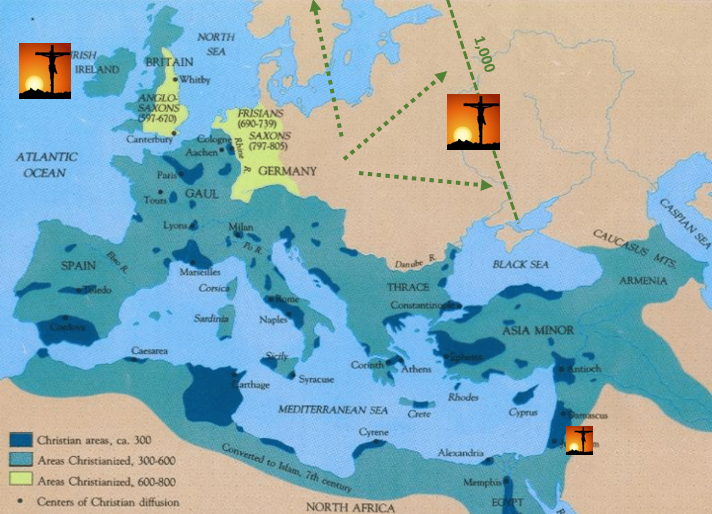 Christ taught his disciples that marriage was monogamous. He began his ministry of converting sinners in his conversation with the Samaritan woman at the well. First he overturned Jewish doctrine on marriage and matters sexual:  marriage is between one man and one woman until death. Later he raised the bar again:  adultery (one of the most grievous of evils) is committed even by lusting (in thoughts and desires) after a woman. Lastly, he raised the bar still higher by indicating that “the few” can choose celibacy for life in order to be available for the spiritual service of others (“for the sake of The Kingdom”).  Other than among Hindus, nowhere has lifelong marriage been more central than in Christianity.  Over the next millennium more people became Christian, as the map shows.  The most obvious indications of Christianity were external manifestations in buildings and power: church-state interactions, the building of great churches, monasteries, and, in the middle ages, the cathedrals of Europe. While priests, monks and nuns, bishops and popes were the visible actors in all this religious activity, beneath it all a very different structural change was taking place, one that gave tremendous strength in industry, art, finance, politics, and learning: the practice of lifelong monogamous marriage. With modern social sciences we can see very clearly the immense difference intact marriage makes to children: they are happier (mental health), they are physically healthier, they learn more, they are less troublesome.  They become much better citizens, better spouses, parents, workers, soldiers, savers, builders, and caretakers.   Over ten centuries as more and more families became monogamous the compounded riches burst forth in great flowering in the early middle ages, yielding great vitality in commerce, finance, building, and arts in what is called “The Renaissance”. Monogamous lifelong marriage survived the Protestant revolt of the 1500s, at least for the next 250 years. Then came the French Revolution which overturned the public culture of marriage and the private lives of increasing numbers of French citizens. “On September 20, 1792, the French National Assembly passed a decree regulating divorce, which for the first time in France opened the possibility of completely severing marital relationships. … One of the spouses may have a divorce decreed by the simple allegation of incompatibility of disposition or of character.” Half a century later Marx and Engels formulated targeted marriage again in “The Communist Manifesto”, and Engels  in “The Origin of the Family, Private Property, and the State” by which “Any sexual relationship between mutually consenting persons would be possible. What would not be possible would be the security of a life-long marriage. This sexual relationship could not be chosen.” Thirty years later, Lenin effectively abolished marriage in 1918 with the most lax of “no-fault divorce laws” then in existence, bringing all much closer to Marx’s ideal of the union of individuals being a purely private affair. By 1926 there was so much chaos —  millions of homeless children and widespread female poverty — that reform laws were passed restoring more stability.  Around the same time as these revisions were being legislated a new Marxist initiative was underway in at Goethe University in Frankfurt Germany: The Institute for Social Research, now known as “The Frankfurt School”. This institute was destined to cause change to the culture, family, schools and even the constitution of the United States.  Its director from 1930 to 1953, Max Horkheimer, sums up their agenda and strategy:

The revolution won’t happen with guns; rather it will happen incrementally, year by year, generation by generation.  We will gradually infiltrate their educational institutions and their political offices, transforming them slowly into Marxist entities as we move towards universal egalitarianism.

When the Nazis bested the Communists for control of Germany, the Frankfurt School faculty, all Marxists, and most secular Jews as well, had to flee the country. Through the mediation of John Dewey, Horkheimer met with the president of Columbia University, Nicholas Murray Butler, who offered The Institute a home and a building at Columbia.  Most of the faculty moved to New York, many taking posts at Columbia and especially in its Teachers College. Many stayed after the end of World War II, Herbert Marcuse being the most famous.  A number were used by the OSS in deciphering and analyzing German war intelligence, some of whom stayed on taking posts in the CIA and the State Department.  The combined diffuse influence of these brilliant intellectuals is hard to overestimate: critical theory (Horkheimer), post-modernism (Habermas), Marxist-Freudian psychology (Adorno and Fromm), sociology (Marcuse, Pollock and Lowenthal). One of their protegees, Kate Millet, did her doctoral dissertation at Columbia “Sexual Politics”, the book form and her activism making her a Time Magazine cover story in 1970.   She was the leader of the group of feminist intellectuals who formed The National Organization of Women (NOW), which maybe the most influential fruit of all this Marxist scholarship. I have written before on the infamous opening litany of these meetings which signaled their key target — the married father of a family – and their key means: hyper-sexualization of the culture.

One of the most notable early victories of NOW was “no-fault divorce”, paralleling Lenin in his first move against the family. Though NOW had many other victories, a few laudable, their most destructively influential one has been the network of Women’s Studies Centers at universities and colleges across the country, most supported by government grants.  In 2014 there were 684, all of them dedicated to radical, societally transformative sexual revolution.  The following June-2020 image from the web site of Cornell University’s Feminist, Gender, and Sexuality Studies Program illustrates the perennial Marxist framing and underpinnings, as Horkheimer’s dream unfolds in America, 75 years after he returned to postwar Germany. 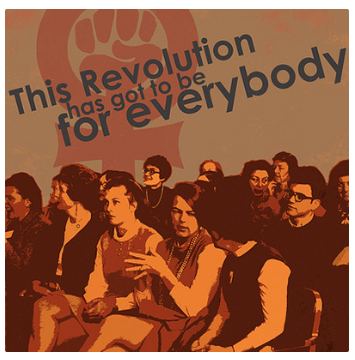 The most recent manifestation of the Marxist advance against marriage and the family is “Black Lives Matter” who state on their homepage: “We disrupt the Western-prescribed nuclear family structure requirement by supporting each other as extended families and “villages” that collectively care for one another, especially our children, to the degree that mothers, parents and children are comfortable … with the intention of freeing ourselves from the tight grip of heteronormative thinking …” Conclusion:  It is worth remembering that when Christ formed His first disciples most of the world — in matters sexual – lived polymorphously as Marx, Engels and Lenin envisaged and as we are now living again.   Christians born in the West up until recent times have lived in the comfort of a Christian-molded legal order that protected women and children by expecting, and (where necessary) enforcing, monogamy. That day is gone. Welcome back to a hard and violent world of polymorphous sex, where the lifestyle of a Christian can be dangerous.   It will take a few hundred years to build a new social order — if there are enough real Christians. It is worth remembering that Christians did not set out to build a new social order. That was a byproduct.  They set out to follow Christ, first and foremost in their hearts, the toughest territory to conquer. He gave them three levels of sexual aspiration: monogamy, purity of mind and heart and, for the few, celibacy for life (though for all, celibacy till marriage).  As Christians gradually abandoned these three interior struggles of the heart, their social structures collapsed around them.   It is in the heart that the battle is won or lost, the family then won or lost, and the culture eventually won or lost.  For the good of the child, who from the moment of conception has the right to demand of its parents their lifelong monogamous marriage, Pat Fagan, Ph.D.