<![CDATA[<span style="font-weight: 400;"]]&gt;The Marxist Feminists by seeking the weakest spot by which to collapse society, found it in the “patriarch” (the father of the family, i.e. the married father, or more precisely in the potential “patriarch”. Remove him and society and its institutions would gradually collapse.  Monogamous marriage is their main target.<span style="font-weight: 400;">

Lenin removed it immediately (1919), but Russian Communists, now with a society to run, restored it in 1929 because of the social chaos it had brought with it.  However, for purposes of destabilizing US society, this was a brilliant insight, not recognized by opponents of Marxism, even among those believed in the sacredness of marriage and family.  That the role of the father was not fully grasped until these deconstruction effects began to be seen. If anything, traditionally that central role was given to mother, not father. But many mistook the natural emotionally-deeper bonding of children to mother,  to be the relational core of family bonding.  Father is, not because he is stronger, but because he is weaker and more vulnerable. 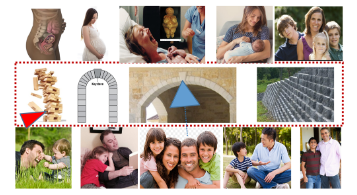 The female, the mother, has nature pulling and pushing her into deep relationship with her children. For nine months she gets to know her baby in her womb with increasing intensity. The catharsis of giving birth yields its own bonding. Breast feeding for the months that follow increases the bond, even as the child’s experience lays down the foundations of the erotic in the adulthood. By contrast the male, the father, gets little help from nature.  His bonding is principally an act of the will, of virtue, of good habit. It can be strong, very strong and has huge effects but on the anthropological level the bond with mother wins out, noticeable on the battlefield and in the celibate priest’s relationship with his parents. The bond with mother is stronger.

Thus, the father’s relationship to his wife and to his children is the lynchpin in the family and society, not because of an inherent male strength but because of an inherent male weakness. His attachment is the treasured glue that makes the family whole, because the father-family relationship is the more breakable one (and the one most often broken). Thus, his role is the keystone that supports the “arch” that is the family, and, given society’s dependence on the family, the keystone that holds society together. The father’s embrace of monogamy is the dynamic that yields a strong culture of love, and commitment.

Without it we get poverty, violence, abuse, educational failure, crime depression, anxiety. Furthermore, these deficits compound when the brokenness is repeated generation after generation — as has been the case with the Black family. A strong marriage is thus the core strength of family and therefore of society.  Each sex has a unique contribution, mother more anchored in the bios, the father in the will (only because of the relative absence of the bios). Hence the married father is the lynchpin of the family, of the community, of the culture. Remove the male and the structure begins to collapse, no matter how great the female. The male’s centrality lies in his relative vulnerability on matters sexual, to sex without the acceptance of its burdens and duties — to the child and its mother.  The erotic is his weak spot. The female knows this and in turn is tempted to use her attractiveness to him to gain attachment or control – two very different temptations, stemming from two very different characters.  The Marxist Feminists realized the potential of male vulnerability for their ends and set it as their main tool. Hence the easy alliance with other groups on all aspects of easy sex: contraception, especially outside of marriage, abortion, gay marriage, sex ed groups (especially SIECUS and its affiliates in the realm of sex education). Today the breakdown of the family is far advanced as the following chart on the most broken makes clear: 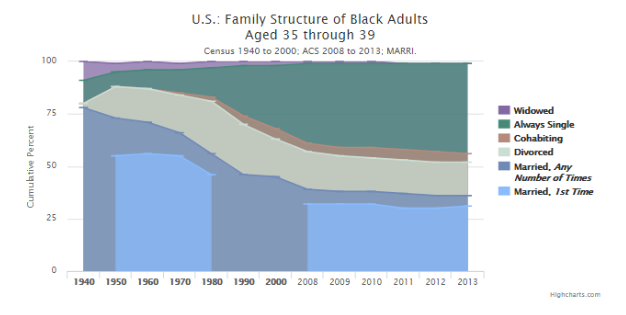 The implications for the society are enormous.  As all cultures evolved, they did so around the transmission of sexual mores. Their biggest function is to keep sexual expression within marriage — in slightly different ways in different cultures, but always within the marriage form of that culture.  The mechanism of enforcement is the taboo. But the US culture today, defanged with the erosion of almost all taboos, instead of being a culture that preserves the family, instead presents constant dangers through the mainstreaming of divorce, serial cohabitation, out of wedlock births, abortion, hook-ups, and pornography, all with debilitating consequences in the formation of the emerging generation. The rescue of society must have at its center the rebuilding of the male as the center of the family.

When that becomes a cultural movement America might be saved. Otherwise its unravelling will continue. It cannot but.  However Americans are practical, “can do” people, so the chances of this happening are good. Keep this in mind as we celebrate the 4th of July.  We need a new generation of “Founding Fathers”.

For overviews of the research on each of these issues, see www.Marripedia.org and for more charts on the same see: charts see https://marri.us/research/sexuality/]]>