“America is free to choose whether the Negro shall remain her liability or become her opportunity.” –Gunnar Myrda, An American Dilemma (1944) Exactly fifty years ago Daniel Patrick Moynihan published his prophetic report, “The Negro Family: The Case for National Action.” In 1965 when the report was written, Moynihan warned that the black family was in crisis: 23.6 percent of blacks were born illegitimately (1963), 21 percent of non-white families had female heads-of-household, and only a minority of black children reached age 18 having always lived with their married parents. But the state of the black family in America today surpasses Moynihan’s worst fears: 72.2 percent of blacks are born out-of-wedlock, 50 percent of black children live with their mother only, and only 17 percent of black children reach adulthood having always lived with married parents. 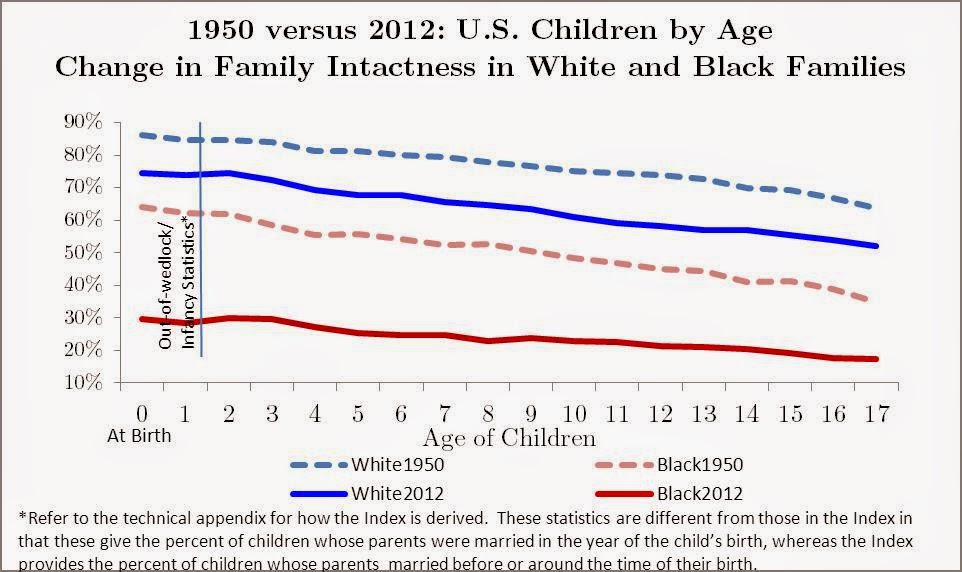 The racial dynamic of America in 2012 is now most complex. One Civil War, three Constitutional Amendments, hundreds of legislative/ juridical decisions, and thousands of protests later, and African Americans still rate disproportionately low on a number of social outcome measures. Unable to explain this phenomenon otherwise, many have blamed a covert but pervasive racism in America. Although this may be true for some perverted individuals, it is not the case of the majority of Americans. There is a different and powerful culprit at work.     By common sense the straightforward way to eliminate an adverse outcome is to mitigate its cause; otherwise, one is only providing temporary treatment rather than a permanent solution. Black social ills have been temporarily treated rather than permanently resolved. During the horrible days of the slave trade, black families were ripped apart—fathers were taken from their children, and wives were left to run households. Blacks still do not have informal equality of opportunity because the broken black family—the real root problem of their social ills—has yet to heal. Relief programs like affirmative action are insufficient solutions because blacks are neither less intelligent nor less capable of working than whites, Hispanics, Asians, or any other race. Rather, many black children are never given the opportunity to fully harness their potential because they suffer the rejection of a broken family and its attendant misfortunates. The real relief the black community needs is an immediate and radical resurgence of intact marriage and all that is necessary to achieve that. The importance of family structure is underlined in two recent publications released by the Marriage and Religion Research Institute (MARRI): “The State of the Black Family in America” and “The Index of Belonging and Rejection.” For both black men and women (aged 35 to 40), the highest number of high school drop-outs were always-single, while the highest number of professional graduates were married. Black men, women, teenagers, and children who were raised in always-single households had the highest rate of poverty of all family structures. Correspondingly, 61 percent of black females and 51 percent of black males receiving TANF or welfare are in always-single families, and 49 percent of black children whose household receives food stamps were being raised by an always-single parent. Currently, only 17 percent of black 15- to 17-year-olds on the cusp of adulthood have been raised by always-married-parents since birth. The state of the African American family explains why racial gaps have, in a sense, widened even though formal discrimination has ended. The government depends on the intact family to achieve its goals, but the intact black family is close to absent, except among highly educated blacks. According to the Fifth Annual Index of Belonging, the number of black teens (15- to 17-years-old) that grew up in intact families dropped from 38 percent in 1950 to 17 percent in 2012. In other words, 21 percent fewer teens have the security of a stable, intact family. 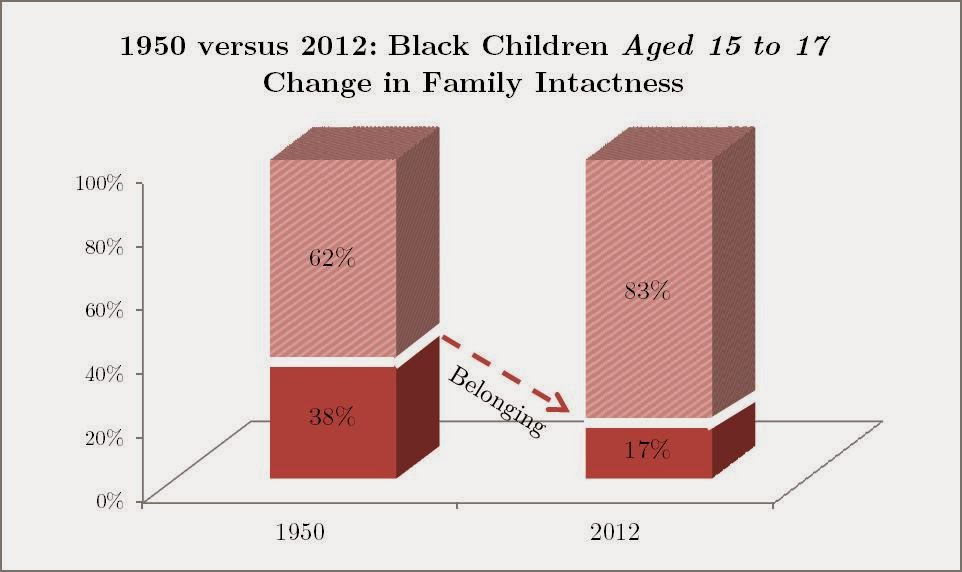 Given this disintegration of the black family, it is no wonder that blacks rank disproportionately low on a number of “ordinary good-life” outcomes. The pernicious effects of family rejection have been compounded across generations and seep into the wider community and its ethos. Children of broken families are more likely to pass their problems on to their own children, and, overtime these adverse outcomes spill over into society at large. Despite the failure of social policy, there is a solution to this vicious cycle: the Black Church. African Americans are among the most frequent church-goers. Recently, however, many churches have become lackadaisical in promulgating Christ’s teachings on chastity and marriage. Social policy has proven useless in correcting the ills of family rejection and brokenness, but the Church certainly can if it has the will. A deep conversion and close following of Christ and His teaching on purity, family values, brotherly love, and communal service are the key ingredients to raising the black family to its rightful integrity. In turn, the black community can then hold the rest of America to this new standard. This is the exemplary role of the black community, and the leadership opportunity that beckons the Black Church.
]]>