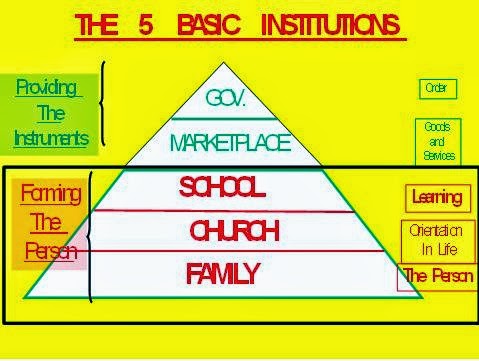 As is shown in the diagram above, it is helpful to understand society as a relationship between five basic institutions or the five fundamental tasks: Family, Church, School, Marketplace, and Government.  Each institution is really a gathering of people to perform a core task that is essential and irreplaceable.  If all five tasks are well-performed, society is doing well. If one of them is not engaging properly with its given task, society begins to limp. If two institutions don’t perform well, society’s limping gets more pronounced, and so on.
At the base of society lies the family—the begetting and raising of children, the next generation.   Without this task society will disappear.  Because the family is focused on producing the next generation, it harnesses sexuality for its ultimate end.  Because children need the love and care of both their father and their mother (and thrive better when such is the case), marriage is the solid foundation.  Though the child comes naturally from sexual union (very little work), marriage comes only with a lot of work and effort.   Since everything else in the society relies on the strength of the family, marriage is key to the success of society as a whole.  A society is as vibrant as its fathers and mothers are solidly married.  The object of it all is the next generation.
The church (shorthand for all religions—church, synagogue, mosque) is where man can orient himself to the big questions of existence:  Is there right and wrong, life after death, a creator God?  Should I keep my word, love those in my family, forgive those who hurt me, give to the needy?  This is important work and like everything else in life, the more one works at something the better he does it.  Worshiping God in community normally involves all these aspects of this task of religion.  As this blog will illustrate repeatedly, the more people worship the better they do—on every outcome.  This little known finding is so universal and so powerful that it ought to be commonplace in our national thinking and discussion.  Its object is the good person.
School (education) is the task of passing on critical knowledge to the next generation so that they can build upon the knowledge already gained from previous generations.  Education almost always has two actors: the pupil and the teacher, the player and the coach.  Education is not confined to the classroom: it goes on, first, foremost and most powerfully, in the home; it goes on at work; in the cinema; in the library; in the newspaper.   Its objective is passing on sound knowledge and insights.
These three institutions—family, church and school— are all “people forming” institutions; they “grow” the person.  Their object is the “goodness of each individual”.
The marketplace is where we meet our physical needs of shelter, food, and clothing—a most fundamental task, without which we would die.  We gain these physical goods through an exchange of our labor for the goods we need.  Savings are stored labor of the past (our labor or others’).  The more productive labor a nation has, the more goods it has.  Working, and learning to work productively, is a key task of the family: both for its own continued existence and for the capacity of the next generation to feed, clothe and shelter itself.  When people refuse to work, they become dependent on others for their needs—this weakens society and, ipso facto, reduces the economy.
The government has the task of using force for the good of society, mainly protecting our freedoms from “bad people”:  external enemies of the intruding armies of attacking nations, or internal enemies who would rob, injure or kill us or our family or friends.  Because both threats exist, it is the primary job of the government to protect its citizens from both these evils.  Laws lay out what government considers right and wrong, and it backs this up with the policeman, the judge, the jail, or even the execution… all manifestations of force, even the ultimate force of death.  For this reason, our police need to be above reproach, for they alone have the power to execute on the spot.  No other person in society has this power.  The object of government is to protect its citizenry’s right to do good.
These two institutions, though they have some influence on the person, are not primarily “people forming institutions”.  They are there on behalf of the instruments needed to live:  physical needs and safety. They are instrumental institutions.
All of these fundamental tasks of society are not only important—they are irreplaceable.  And at the foundation of them all is the first, the family.  Thence comes the next generation and every actor in every institution.  There also are all these basic tasks executed… family, religion, education, marketplace and government.  Thus it is there that the education of the future citizen in all five tasks begins and is most shaped.
Thus the most important of all tasks is the bringing of the next generation (the baby) into existence.   Therefore the most important relationship in society is that of the relationship between father and mother.  The stronger that relationship, the stronger the children (as all the data continuously illustrate).
The way marriage is structured and carried out determines the functioning of the rest of society.
The presence or absence of marriage structures the fami ly, and as family is structured so is society structured—strongly or weakly, in every institution: the family itself, the church, the school, the marketplace and the government.
These relationships are as powerful as the laws of physics: they cannot be denied, overlooked, evaded or cast aside without society crumbling.  Many societies today seem intent on that pathway, but that is for future blogs and for the data to illustrate.


This paradigm of the five basic institutions is the framework within which we will blog on the research MARRI does and that others of note do.   Tune in for continued education, and join in for continued discourse!
]]>