<![CDATA[The media tends to report the rise of ‘nones’ as if it were a neutral development, a phenomenon far from the case. <span style="color: #0000ff;">According to Pew Research Center (May 2015): ‘ Religious “nones” – a shorthand we use to refer to people who self-identify as atheists or agnostics, as well as those who say their religion is “nothing in particular” – now make up roughly 23% of the U.S. adult population. This is a stark increase from 2007, the last time a similar Pew Research study was conducted, when 16% of Americans were “nones.”’ 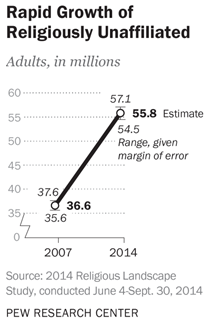 Were analogous depletions happening to the financial and economic systems, all sorts of alarm bells would be sounding. However from what we have learned again and again about the positive benefits of religious worship on adults and children this rise portends (and the adjective is deliberate) massive costs over the coming decades.  Health and longevity will be harmed (even as applied biology gives more benefits), the educational attainment of adults and children will be less than their religious peers, family fracturing will increase, addictions will increase and crime will increase.  These are all the natural consequences of the absence of a necessary human good.  Just as calcium is needed for strong bones religious practice is needed for good citizens.  The monetary costs of extra burdens will be enormous. George Washington summed up the importance of religion to the new nation with particular eloquence in his Farewell Address:

Of all the dispositions and habits which lead to political prosperity, religion and morality are indispensable supports. In vain would that man claim the tribute of patriotism who should labor to subvert these great pillars of human happiness — these firmest props of the duties of men and citizens. The mere politician, equally with the pious man ought to respect and to cherish them. A volume could not trace all their connections with private and public felicity. Let it simply be asked, ‘Where is the security for property, for reputation, for life, if the sense of religious obligation desert the oaths which are the instruments of investigation in courts of justice?’ And let us with caution indulge the supposition that morality can be maintained without religion. Whatever may be conceded to the influence of refined education on minds of peculiar structure, reason and experience both forbid us to expect that national morality can prevail in exclusion of religious principle.

Truer words were never spoken about modern America. And what a source!]]>