Menu
If you recall from my blog post on the romantic comedy “Four Weddings and a Funeral,” the characters’ number of past sexual partners doesn’t figure largely in the overall plot of the story. I was surprised, however, to read a few days ago about a film whose storyline is entirely based around the issue.
Meet Ally Darling, the fictitious star of “What’s Your Number?”. Ms. Darling is, as the tagline says, “looking for the best ex of her life.” The film’s trailer shows her out with a group of girlfriends when one announces that 96 percent of American women who have had twenty or more sexual partners will be unable to marry. We’ll flash back here to data from the 1995 National Survey of Family Growth (which we also cited in the blog post mentioned above). 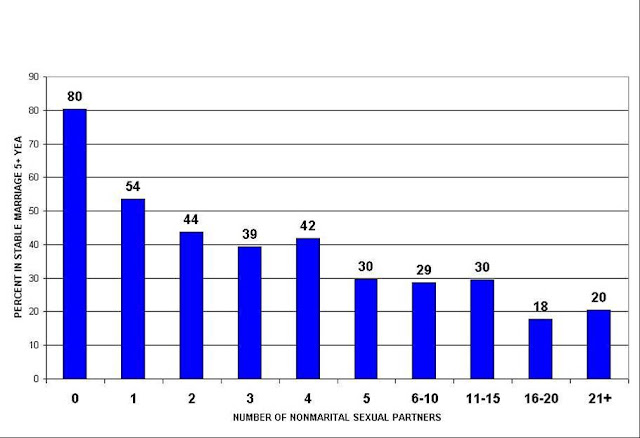 The data is pretty telling: Only 18-20 percent of women with Ally’s sexual history are able to marry stably. The problem is, the film won’t show this. Perhaps her wedding is shown at the end of the flick in a happy montage of photos, as in “Four Weddings and a Funeral,” but what happens after the credits are done rolling and the catchy music is off?
Even worse than the apparent trend of portraying fantasy in movies as reality is the fact that many women apparently still don’t believe that sexual history or chastity matter at all when it comes to future happiness. I actually first heard about “What’s Your Number?” from the blog Feministing. According to the author of the post that covered the movie,

“[T]he bottom line is if women are upset about how many people they have had sex with, it is either because the sex has been terrible or because of external social pressure and faux-moral judgement [sic]. Despite what the anti-sex set may believe, how much sex you have today, does not impact your ability to be in a successful relationship later” [emphasis added].

What do you think? In light of the data above, what can we do to share the importance of preserving intimacy for marriage?
]]>