In a recent professional seminar discussion on the relational dynamics of chastity and monogamy  with mental health professionals in Arlington VA a powerful concept came to the fore:  the centrality of relationships to the life of each person.  A person’s life is as good as the relationships he or she has formed.

The most powerful human relationship is that of marriage. One therapist noted: “In lots of our work the marriage is the client. We often treat the marriage not the individuals.”  That this relationship is quite sensitive to the lifelong chastity of the couple was the focus of much of the discussion.
As the charts on the demographics of sexual partnering were reviewed the conclusion drawn was that chastity is the virtue which gives sex its due. The sexual relationship, fundamental to the continuance of the human race, will go powerfully in one of two different directions: binding the couple forever in love and fidelity or instead leaving the permanent weakness of a bond that ended in rejection.  Chastity leads to the first; multiple partners lead to the second. The following chart shows the percent of stable marriages as relating to the number of sexual partners experienced. 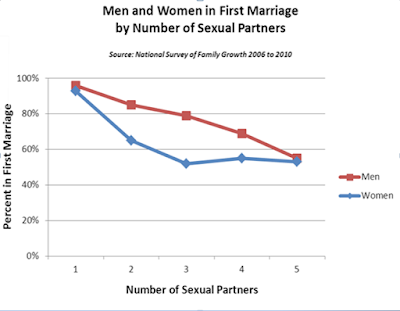 The demographic data on the US population tells a sad story: the impact of rejection after sexual coupling is writ large across the United States and continues from one generation to the next as the following chart illustrates. Whether a father leaves and when he leaves has a big impact on his daughter by the time she reaches her teens. 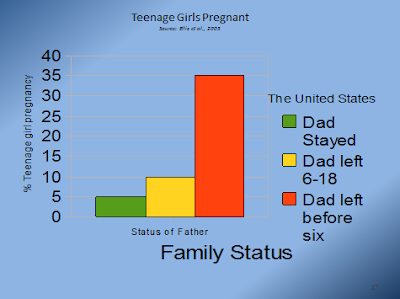 The generations of the United States are weakening as marriage relationships become more unstable and rejection among parents spreads.
]]>

1 thought on “Mental Health and Chasity”