By Anna Dorminey and Henry Potrykus, Ph.D., Staff We all like to believe that, as unique individuals, we’re masters of our own destiny and originals in our own right. We may still cling to this privilege in the , but Austrians have officially lost the dispensation, at least with regard to their likelihood to marry and bear children. 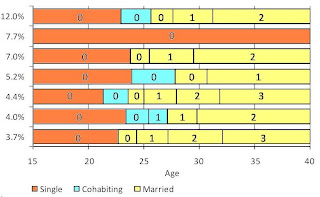 Relaxing a little the age rigidity of these life-paths, she found that the largest proportion of the Austrian population (19.1%) chooses never to have children and to live in one cohabiting relationship after another (she calls this “sequential cohabitation”). The smallest proportion (6%) chooses traditional parenthood—direct marriage, no cohabitation—with three or more children.

Berghammer found that those who attend Mass monthly or weekly are more likely to marry directly, without cohabiting, and to have at least two children. She also found that a person’s odds of cohabiting sequentially (versus his likelihood to follow the most common life path—cohabiting, eventually marrying and having two kids along the way) are halved if they attend religious services.
Those who don’t claim any religion are 87% more likely than Roman Catholics to have children outside of marriage. Additionally, for every sibling a person has, he or she is 29% more likely to choose traditional parenthood and to have three or more children rather than the aforementioned “most common life path.”
Notably, people who consider themselves religious but don’t regularly attend church don’t seem to differ much from those who don’t consider themselves religious.
Figures and chart: Caroline Berghammer, “Family life trajectories and religiosity in ,” August 2010 draft version- later published in the European Sociological Review (2010).
]]>