Newly elected Republican leadership in the House and Senate is sure to usher in a wave of policy proposals, reforms, and disputes. A predictably significant debate already underway is the extent to which policy will encourage self-sufficiency rather than reliance upon government.

Between 2008 and 2011, household participation in government benefit programs rose from 45.3 percent to 49.2 percent. However, the majority of Americans favor independence to reliance on the commons (i.e. government re-distribution).  Of those polled, 74 percent believe that Americans are too dependent on government (87 percent of Republicans and 58 percent of Democrats expressed this view). 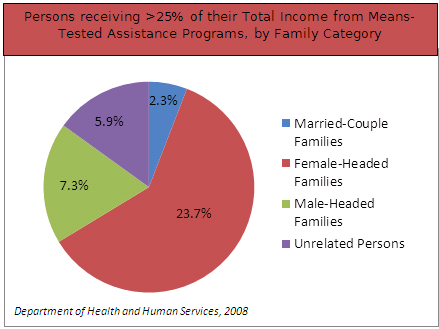 Encouragingly, there is a natural, efficient, and generally bipartisan remedy that will decrease government reliance and encourage self-sufficiency: the intact, married family. In 2011, federal and state governments spent over $450 billion on means-tested welfare for low-income families with children. Roughly three-quarters of this welfare assistance, or $330 billion, went to single-parent families. Notably, three-fourths of all women applying for welfare benefits do so because of a disruption of marriage.
For most measures of government dependency, family intactness is the leading influence (or shares the position of leading influence with the fraction of adult high school graduates). For instance, more adults in their first marriage (47 percent) have private health insurance than those who have been always single (23 percent), cohabit (6 percent), have divorced (10 percent), or have re-married (13 percent).
The influence of family intactness on independence is readily apparent in the breakdown of welfare recipients by family structure. Family intactness in a geographic area has the largest influence on average welfare transfers in that geographic area. This is not surprising because Temporary Assistance for Needy Families (TANF) primarily supports low-income women and their children. Only 16 percent of adult women who receive TANF or welfare are in their first marriage.
The fraction of intact families in a geographic area also has the largest influence on average Supplemental Security Income (SSI) transfers to men aged 25 to 54 (with controls applied for demographics, education, and earnings). Most men who receive Supplemental Security Income (SSI) have always been single (52 percent) or are divorced (17 percent).
Social science shows that intact families are more self-reliant and therefore have more options to direct their own lives; however, non-intact families are at the mercy of the government..
If the new majority will take the longer term view they will talk up the for parents, pastors and teachers to work to restore marriage in the nation for there is little that Congress can do to rebuild marriage (though there is a lot it can do (and has done) to damage marriage. The rebuilding will be done mainly by other institutions, but encouragement by leaders will be very helpful.
]]>