<![CDATA[In a recent online symposium entitled “<a href="https://contemporaryfamilies.org/wp-content/uploads/2015/03/2015_Symposium_Family_Structure.pdf">Moynihan +50: Family Structure Still Not the Problem” the Council on Contemporary Families (CCF) dismissed family structure as a trivial factor in the social and economic woes of Black families. But federal data paints a different picture: In 2012, only 30 percent of Black 2 year olds lived with their married parents, and only 17 percent of Black 17 year olds grew up in intact families. These numbers are far from insignificant. Contrary to CCF’s claim, Moynihan’s cry for a rejuvenation of intact Black families remains as pertinent and critical today. The CCF’s report is inundated with straw man arguments and misleading data: First, the CCF misrepresents Moynihan’s argument. William Chafe incorrectly claims that “Moynihan seemed to suggest that if blacks would only get and stay married they would cease to be poor…” But neither Moynihan nor any other sociologist that I am aware of believes that married families are the one and only end-all solution for all social ills in the Black community. Rather, Moynihan asserted that family brokenness is a significant contributor to poor outcomes, that family structure was being ignored as an important factor, and that no policy proposal that disregards the family would provide an enduring solution. Even Philip Cohen, Heidi Hartmann, Jeff Hayes, and Chandra Childers (contributors to the symposium) concede that “family structure is one key factor that determines the economic resources available to adults and children.” So, if we can agree that family structure is a key factor that is being ignored, it’s quite reasonable to posit that family structure is at the heart of the problem. Second, the CCF cherry-picks data to make its ideologically-driven point. For example, the CCF claims that family structure cannot greatly influence crime rates because data from the Current Population Survey shows that the share of Black single mothers has risen in past decades while data from the Bureau of Justice Statistics (that does not even account for family structure) shows that juvenile violent crime arrests has decreased. This is a poor use of data. Research by the Marriage and Religion Research Institute that ran regressions on specific variables using the American Community Survey found that family intactness is the most important, or at least as important, as any other factor in determining a beneficial outcome. Education attainment, another key factor, is largely related to family structure: most Black adults in their first marriage receive a professional degree, but most always-single adults are high school drop-outs (see graphs below). 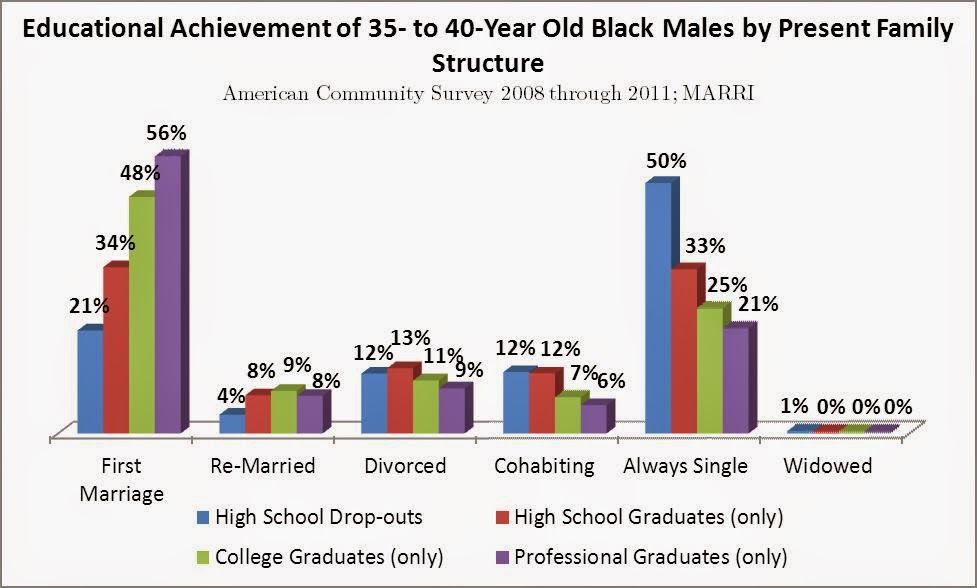 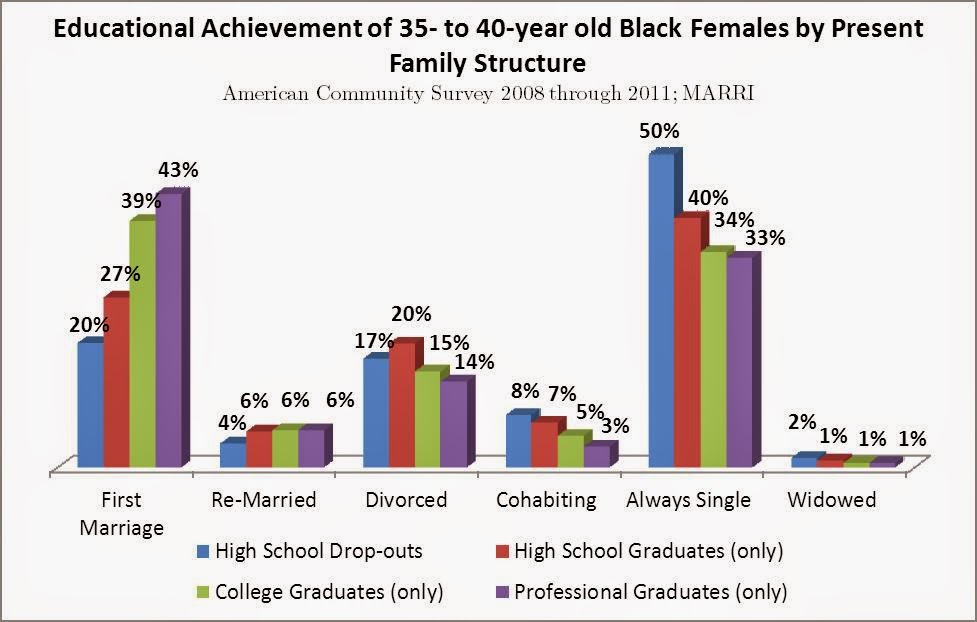 The social sciences well done cannot but illustrate the way God made man. Family structure is not the only factor that influences that state of Black families in America, but it is the most encompassing. Good social science has and will continue to uphold the intact, married family as a vital component to social and economic stability.]]>