<![CDATA[Pat Fagan, Ph.D.<br />Director, MARRI Christianity gave the world a social order that was based on monogamy, the fruit of Christ’s teachings on marriage, divorce, adultery and fornication.   He raised the bar higher than any prophet or moralist ever had.  It was a tough standard and even his closest followers balked when they realized the implications:  “In that case it is better that a man not marry.” (Mt. 19:10). But Christ knew what was possible to those who embraced His way, and gradually, as Christianity spread and as Western Civilization was formed stable monogamous marriage became more and more the norm.  The different Christian nations and cultures had different ways of protecting the chastity of their youth, especially that of their young women: think of Spanish chaperoning.   Virginity until marriage and monogamous, stable marriage definitely became very common, and the rare event was the total breakdown of a marriage.  America today is very different.  Fifty four percent of our seventeen year olds have parent who have split.  We have become a culture of rejection between the two sexes. 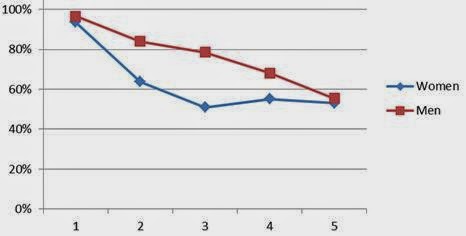 The chart above gives more than a hint of why our present sexual culture is linked to the break-up of first  marriages:  the number of sexual partners that a spouse has had prior to marriage, and — with expectations of controversy for this hypothesis — especially the number of sexual partners the new wife has had.
While the stability of the first marriages of both men and women seems linked to their sexual histories, and wives who are non-virgins are more likely than their husbands to divorce, relative to their sexual history.  The rates of stability for virginal men and women are quite similar, but the correlational difference between the husband being his wife’s second sexual partner has more impact on the stability of their marriage than does the analogous for him.  And if he is her third sexual partner the impact increases, approaching a 50 percent breakdown.
The initial correlation for men is less dramatic, but is steadily negative and for both men and women whose first husband is their fifth sexual partner the probability of marital breakdown is similar and disastrous: one in two.
This data is from a recent MARRI analysis of the NSFG 2006-2010 data, yet to be published on-line.  Though it is only correlational its fits with other more rigorous analyses of similar, earlier data from the same survey, for instance that by Jay Teachman.
The stability of marriage is strongly dependent on life-time monogamy, and seems weighted more to the monogamy of women.
Such seems to me the case the data makes.   It is uncomfortable data for modern young men and women but, to quote John Boyd:  “The most important data is the data that does not fit.”  This interpretation needs to be challenged and the best way to do that is to see if rigorous analysis (regressions for a start) comes to the same conclusion.  In the answer lies the strength of the next generation.
]]>