<![CDATA[The most beneficial family structure is that of the intact family. This structure, however, is declining in practice for many Americans. The Census Bureau recently released data on marriage taken from the 2008-2012 American Community Survey. The findings revealed that between the year 1996 and 2008-2012 there has been an increase in individuals choosing to never marry and an increase in remarriages among women. Simultaneously there has been a decrease in individuals who are married only once. The percent of females getting married once between 1996 and 2008-2012 decreased from 60 percent to 54 percent. During the same time those who had never married increased from 24 percent to 28 percent. Finally, women who had been married twice (remarried once) grew from 13 percent to 14 percent. <div style="clear: both; text-align: center;">

These trends are also found in men. Between 1996 and 2008-2012 the proportion of men who were only married once decreased from 54 percent to 50 percent. Men who had never married increased from 31 percent to 34 percent. 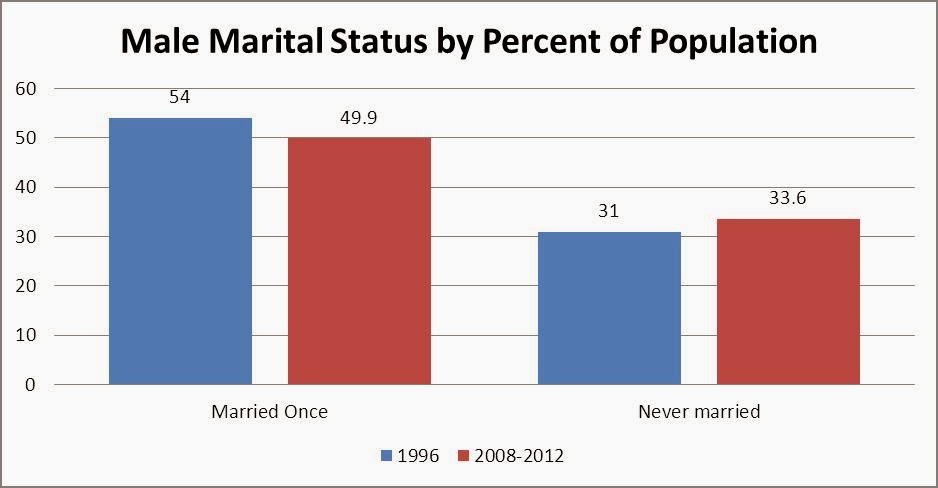 In summary there is a notable downturn in the number of people choosing to create intact married families. Neither remarriage nor choosing not to marry allows for the plethora of benefits that come from an intact married family. Children from intact married families have less behavioral problems, better social development, better education, better child-parent relationships, and less criminal activity. For adults, the benefits of an intact marriage include: sexual satisfaction, income,  health and many others. Given what is now well known about the benefits of intact marriage for adults and children these developments predict an even weaker American population as the adults age and the children reach a more stunted maturity… the America of the future.
]]>