Shoplifting Among Adolescents by Family Structure and Religious Practice 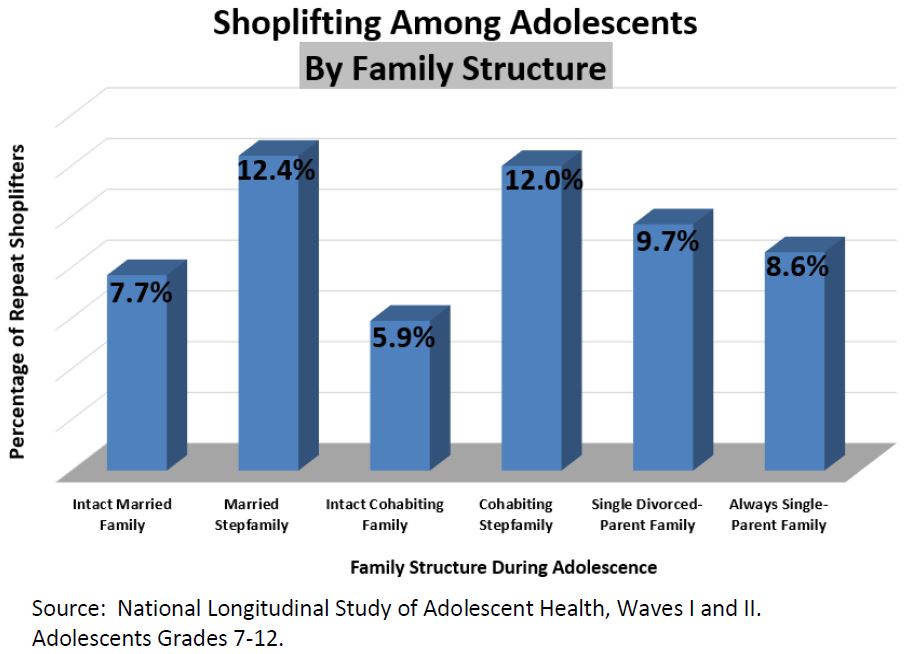 Religious Practice: Whereas only 6.2 percent of students in Grades 7-12 who worshipped at least weekly had shoplifted three or more times, 10.9 percent of those who never worshipped were repeat shoplifters. In between were those who attended one to three times a month (7.5 percent) and less than once a month (10.4 percent). 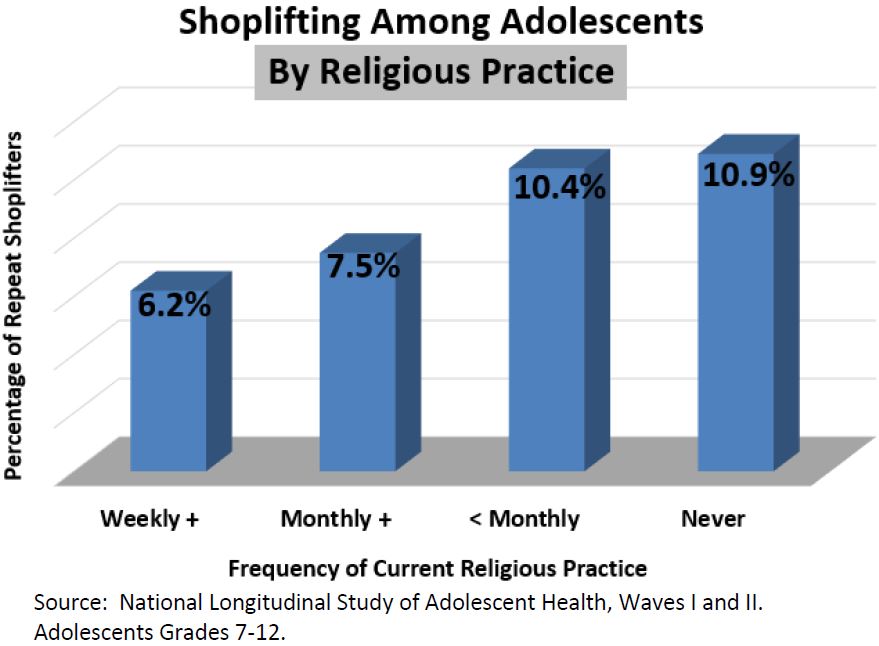 Family Structure and Religious Practice Combined: Only 6.1 percent of adolescent students who lived with both biological parents and worshipped at least monthly had repeatedly shoplifted. By contrast, over 12 percent of adolescent students who worshipped less than monthly and came from single-parent or reconstituted families had shoplifted repeatedly. In between were those in non-intact families who worshipped at least monthly (7.9 percent) and those who lived in intact families but worshipped less than monthly (9.9 percent). 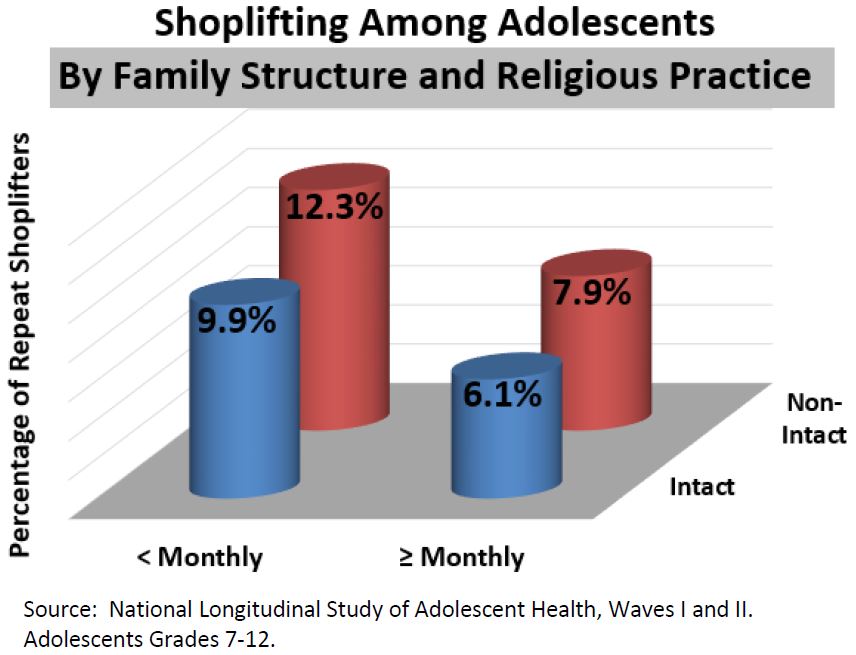 Related Insights from Other Studies: [2] Several studies corroborate the direction of these findings. Byron Johnson of Baylor University and colleagues found that while religiosity in adolescents has a negative impact on delinquency, adolescents who live with both biological parents are also less likely to associate with delinquent friends.[3] Mark Regnerus of the University of Texas at Austin reported that adolescents with higher family satisfaction and a greater degree of parent religiosity are less likely to be delinquent.[4] In another study, Regnerus and Glen Elder of the University of North Carolina at Chapel Hill found that the more important religion is to adolescents and the more satisfied adolescents are with their family, the less likely they are to engage in delinquent behavior.[5] Jerry Trusty of Texas A&M University also reported that the greater the import adolescents place on religion and the more often they attend religious activities, the more likely they are to have involved parents and the less likely they are to be delinquent.[6] The moral beliefs and values developed through frequent religious worship and an intact family powerfully counteract the temptations of shoplifting and other delinquent acts. Through attendance at religious service and the influence of married parents, adolescents are more likely to respect others’ property.   [1] Given the variance in both instances there is no significant difference between these two structures. [2] The last two findings are from www.familyfacts.org. [3] Byron R. Johnson, et al., “Does Adolescent Religious Commitment Matter? A Reexamination of the Effects of Religiosity on Delinquency,” Journal of Research in Crime and Delinquency 38 (2001): 22-40. [4] Mark D. Regnerus, “Linked Lives, Faith and Behavior: Intergenerational Religious Influence on Adolescent Delinquency,” Journal for the Scientific Study of Religion 42 (2003): 189-203. [5] Mark. D. Regnerus and Glen H. Elder, “Religion and Vulnerability among Low-Risk Adolescents,” Social Science Research 32 (2003): 633-658. [6] Jerry Trusty, “Relationship of High School Seniors’ Religious Perceptions and Behavior to Educational, Career, and Leisure Variables,” Counseling and Values 44 (1999): 30-40.]]>