According to the National Survey of Family Growth, Cycle 6 (2002), [1] women who grew up in an intact married family and who worshipped weekly at the time of the survey were the least likely to have had sexual intercourse before age 18, when viewed from the perspective of family structure and religious attendance.   Family Structure: 52 percent of women who grew up in intact married families had sexual intercourse before turning 18, followed by women from intact cohabiting families (64.7 percent), single divorced parent families (71.7 percent), married stepfamilies (76.7 percent), always single parent families (78.8 percent), and cohabiting stepfamilies (84.3 percent). 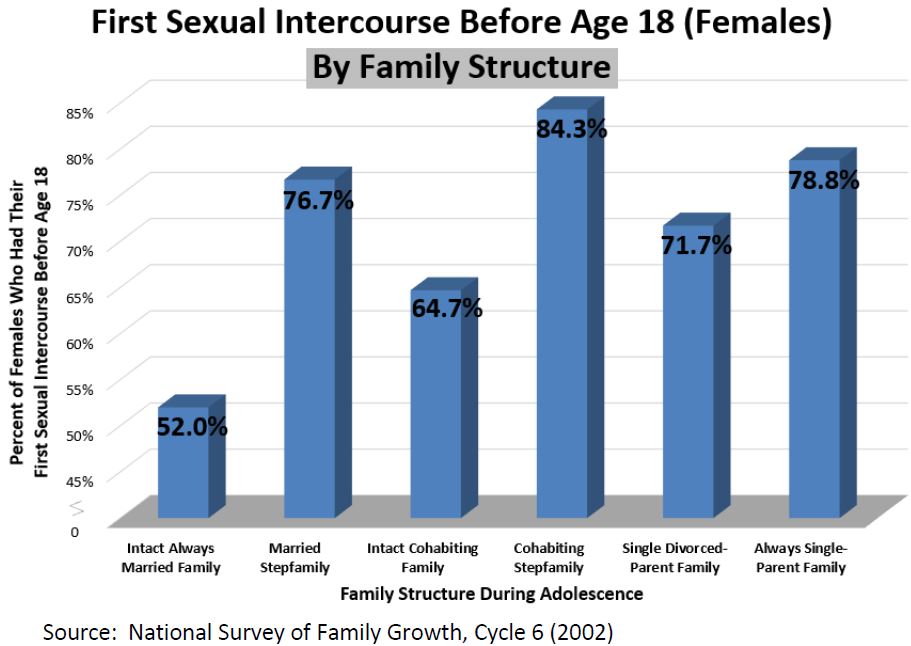 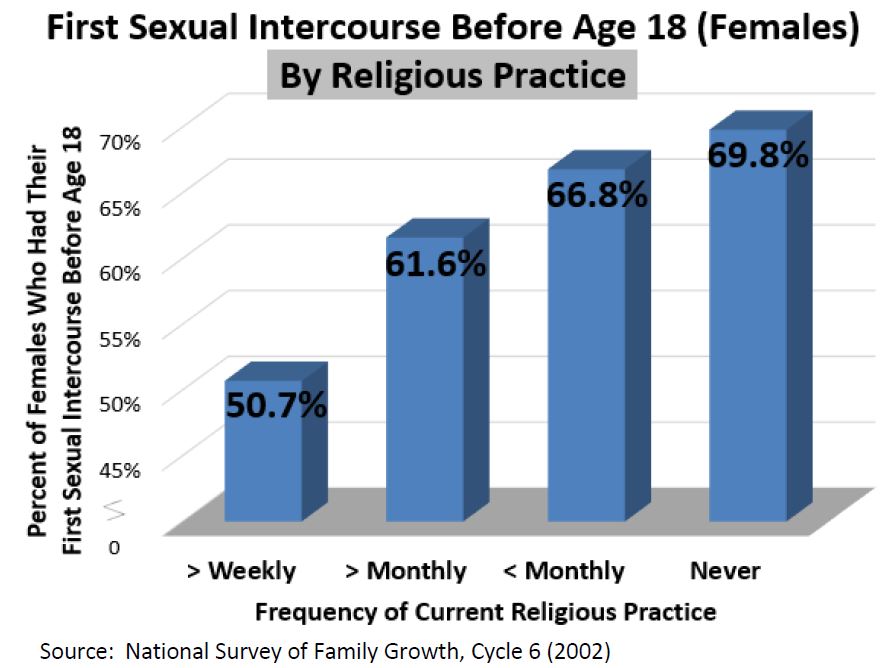 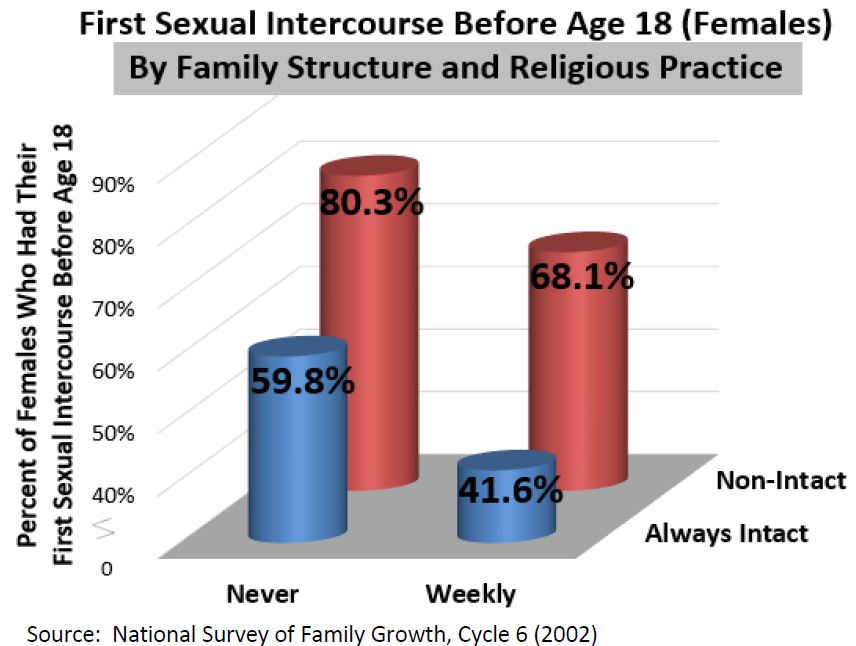 Related Insights from Other Studies: Several other studies corroborate the direction of these findings. Sam Hardy and Marcela Raffaelli of the University of Nebraska-Lincoln reported that “higher religiosity at 15-16 years was significantly associated with still being a virgin 2 years later.”[2] Jill Sinha of Princeton University and colleagues also found that “[b]oth attendance in worship services and participation in a religious youth group were negatively correlated with sexual activity.”[3] Cristina Lammers of the University of Uruguay and colleagues reported that adolescents under “17 years of age, from two-parent families, were more likely than peers from single-parent families to delay sexual intercourse.”[4] Mignon Moore of Columbia University and P. Lindsay Chase-Lansdale also found that teenagers living in single mother families have a greater chance of sexual debut than those living in married families.[5] Dawn Upchurch of the University of California, Los Angeles and colleagues reported that “[t]eenagers living with a single parent or in a stepfamily had significantly higher rates of transition to first sex than did those living with both biological parents.”[6] As the evidence indicates, women who grew up in an intact family and who worship weekly are less likely to have had sexual intercourse before turning 18.   [1] These charts draw on data collected by the National Survey of Family Growth, Cycle 6 (2002). The sample consists of women between the ages of 14 and 44 and numbers 7,643. [2] Sam A. Hardy and Marcela Raffaelli, “Adolescent Religiosity and Sexuality: An Investigation of Reciprocal Influences,” Journal of Adolescence 26 (2003): 731-9. [3] Jill W. Sinha, Ram A. Cnaan, and Richard W. Gelles, “Adolescent Risk Behaviors and Religion: Findings from a National Study,” Journal of Adolescence 30 (2007): 231-49. [4] Cristina Lammers, Marjorie Ireland, Michael Resnick, and Robert Blum, “Influences on Adolescents’ Decision to Postpone Onset of Sexual Intercourse: A Survival Analysis of Virginity among Youths Aged 13 to 18 Years,” Journal of Adolescent Health 26 (2000): 42-8. [5] Mignon R. Moore and P. Lindsay Chase-Lansdale, “Sexual Intercourse and Pregnancy among African American Girls in High-Poverty Neighborhoods: The Role of Family and Perceived Community Environment,” Journal of Marriage and Family 63 (2001): 1146-57. [6] Dawn M. Upchurch, Lené Levy-Storms, Clea A. Sucoff, and Carol S. Aneshensel, “Gender and Ethnic Differences in the Timing of First Sexual Intercourse,” Family Planning Perspectives 30 (1998): 121-7.]]>