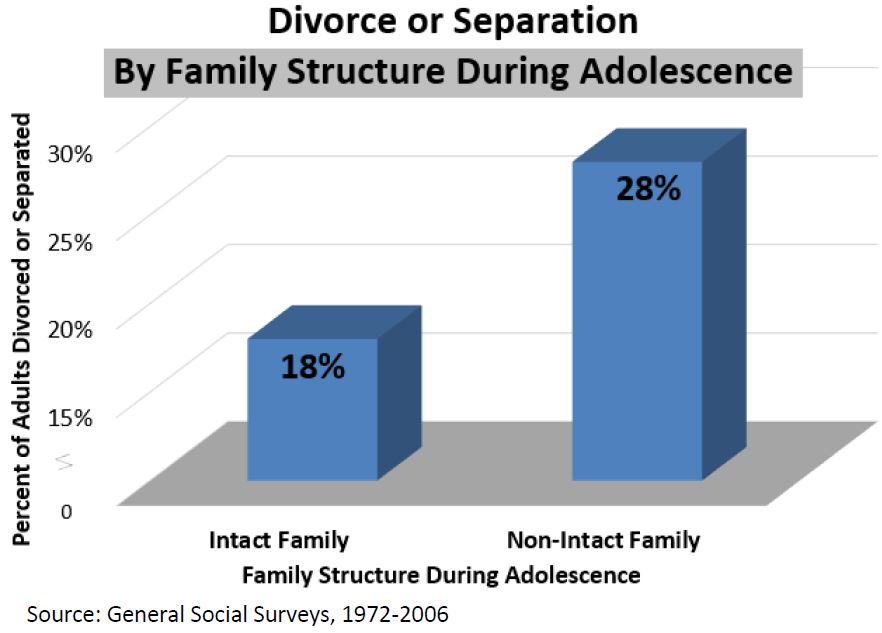 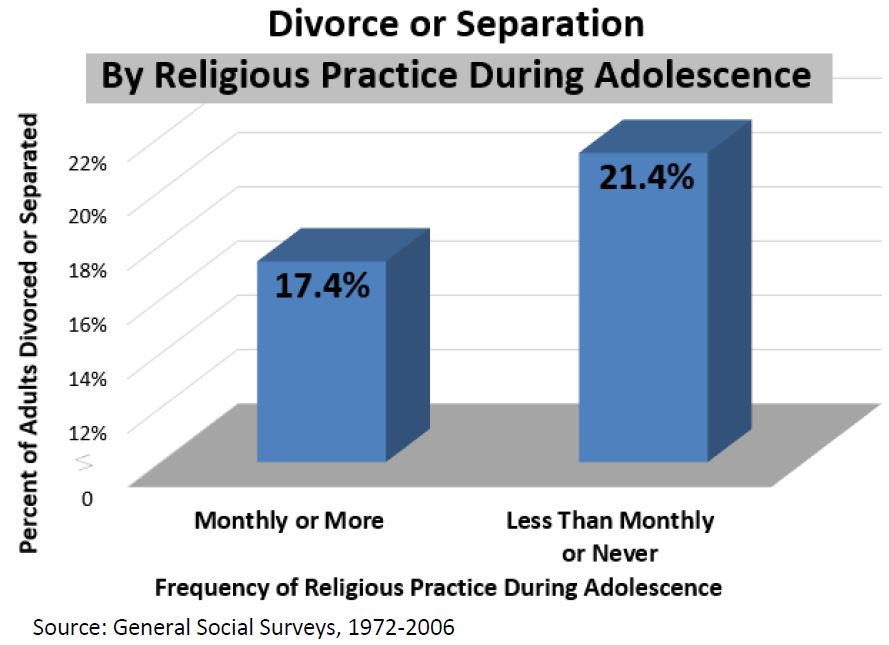 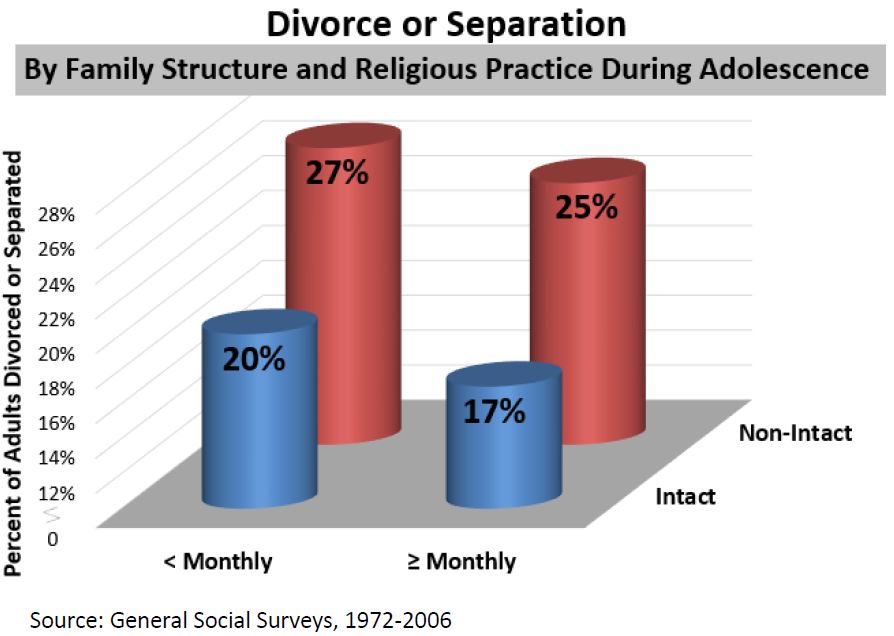 Related Insights from Other Studies: Several other studies analyzing the association of contemporaneous religious attendance with marital stability corroborate the direction of these findings. Vaughn Call and Tim Heaton of Brigham Young University reported that, compared to other religious elements such as affiliation or strength of beliefs, “attendance has the greatest impact on marital stability.” Couples who attend church together weekly have a lower risk of divorce than those who worship less frequently.[2] John Wilson and Marc Musick of Duke University also found that “the higher the level of involvement in the social life of the church, the more [a couple’s] marriage is valued.”[3] Similarly, Timothy Clydesdale of the College of New Jersey reported that “nonparticipation in a religious worship community was associated significantly with…an increased likelihood of having been divorced.”[4] As the evidence indicates, frequent religious attendance in adolescence and adulthood, reduces the odds of divorce or separation. A number of studies also indicate the positive effects of growing up in an intact family. Paul Amato of the University of Nebraska found that “adult children of divorced parents have an elevated risk of seeing their own marriages end in divorce.”[5] Pamela Webster of Brown University and colleagues reported that “children of divorce, more than those from any other single-parent family type, express the most doubts about their marital stability (in addition to the greater perceived chances of divorce, they more often report marital trouble even when very happily married). Moreover, among those in less than very happy marriages, children of divorce are more likely than those with any other single-parent history to escalate conflict and reduce communication with their spouse, and those marital interactions are associated with an increased self-reported risk of divorce.”[6] Several studies have analyzed religiosity, childhood family structure, and adult divorce combined. Matthew Bramlett and William Mosher of the Centers for Disease Control and Prevention found that “women whose religion is somewhat or very important are…less likely to experience a breakup of their first marriage than those whose religion is not important” and that women who grew up living with both parents “are less likely to experience the breakup of their first marriage than women who were not raised with two parents throughout childhood.”[7] Examining divorce in the Netherlands, Paul de Graaf of Radboud University Nijmegen and Matthijs Kalmijn of Tilburg University also reported that “religion has a clear negative effect on divorce” and that “the overall effect of a parental divorce is significant and substantial: People who have divorced parents (when they were growing up) have a 1.9 times higher odds of divorce than others.”[8] Religion and an intact family during childhood prove effective in strengthening marriages against the possibility of divorce.   [1] This chart draws on data collected by the General Social Surveys, 1972-2006. From 1972 to 1993, the sample size averaged 1,500 each year. No GSS was conducted in 1979, 1981, or 1992. Since 1994, the GSS has been conducted only in even-numbered years and uses two samples per GSS that total approximately 3,000. In 2006, a third sample was added for a total sample size of 4,510. [2] Vaughn R. A. Call and Tim B. Heaton, “Religious Influence on Marital Stability,” Journal for the Scientific Study of Religion, vol. 36 (1997): 382-392. [3] John Wilson and Marc Musick, “Religion and Marital Dependency,” Journal for the Scientific Study of Religion, vol. 35 (1996): 30-40. [4] Timothy T. Clydesdale, “Family Behaviors among Early U.S. Baby Boomers: Exploring the Effects of Religion and Income Change, 1965-1982,” Social Forces, vol. 76 (1997): 605-635. [5] Paul R. Amato, “Explaining the Intergenerational Transmission of Divorce,” Journal of Marriage and the Family, vol. 58 (1996):  628-640. [6] Pamela S. Webster, et al., “Effects of Childhood Family Background on Adult Marital Quality and Perceived Stability,” American Journal of Sociology, vol. 101 (1995):  404-432. [7] Matthew D. Bramlett and William D. Mosher, “Cohabitation, Marriage, Divorce, and Remarriage in the United States,” Vital and Health Statistics, series 22 (2002): 1-32. [8] Paul de Graaf and Matthijs Kalmijn, “Change and Stability in the Social Determinants of Divorce: A Comparison of Marriage Cohorts in the Netherlands,” European Sociological Review, vol. 22 (2006): 561-572.]]>