Children Who Repeated a Grade by Family Structure and Religious Practice 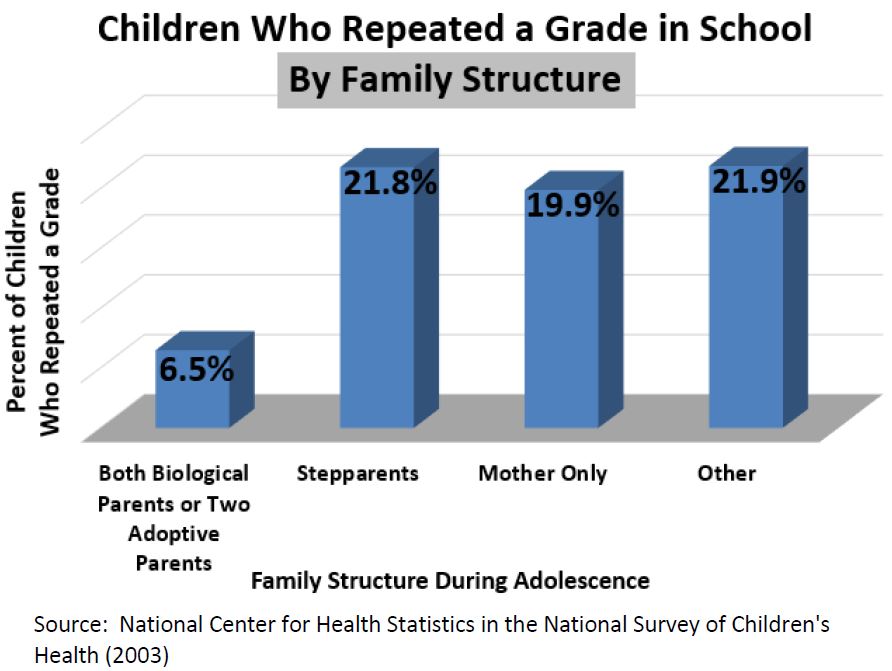 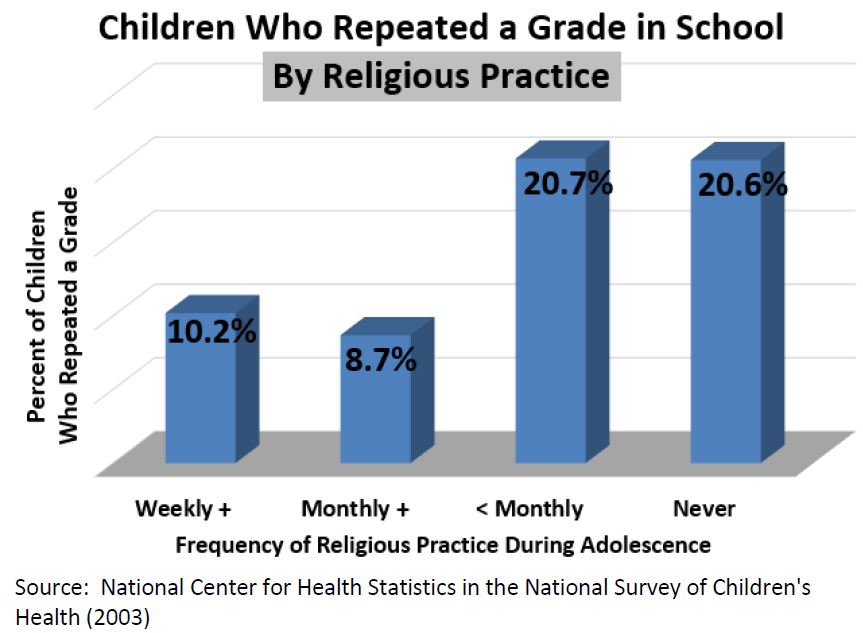 Family Structure and Religious Practice Combined: Only 6 percent of children who worshiped frequently and lived with both biological parents or with two adoptive parents had repeated a grade. By contrast, 34 percent of children who worshipped less than monthly and lived in single-parent or reconstituted families had repeated a grade. In between were those who lived in intact families and worshipped less than monthly (eight percent) and those who lived in non-intact families who worshipped at least monthly (15 percent). The data were taken from the National Survey of Children’s Health. 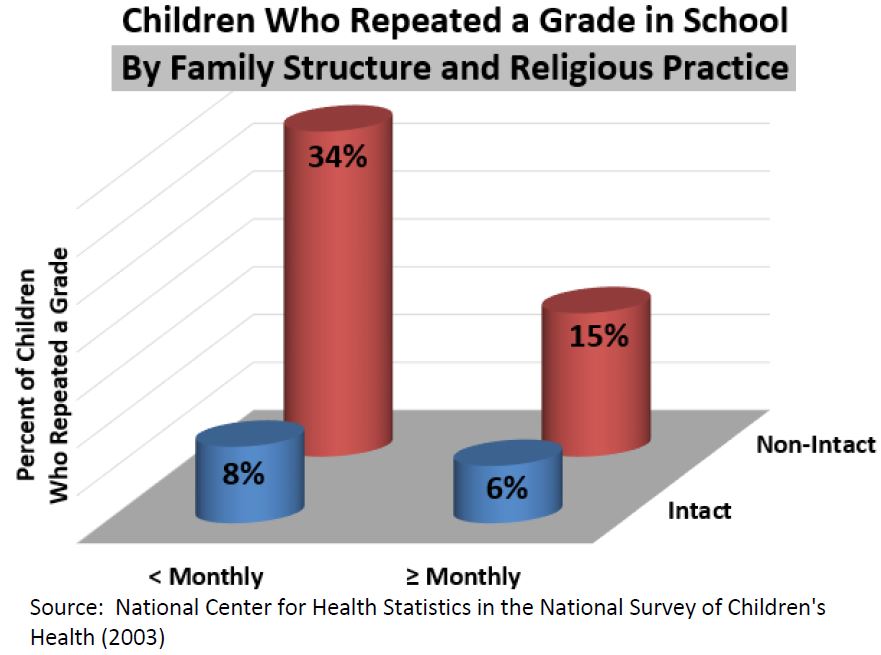 Related Insights from Other Studies: Nicholas Zill found similar differences in grade repetition rates between children of ages 7-17 living with their mother and father and those living with their mother only or with mother and stepfather in an analysis of data from the 1988 National Health Interview Survey on Child Health.[3] Several other studies corroborate these findings. Robert Byrd of the University of Rochester School of Medicine and Dentistry and colleagues reported that students in two-parent households are less likely to repeat a grade than those in one-parent households.[4] Hak-Ju Kim of Washington University in St. Louis also found that children living with two biological parents are less likely to repeat a grade than those living with single parents or stepparents. Children living with single parents, though, are slightly more likely to repeat a grade than those living with a stepparent.[5] Examining the National Study of Adolescent Health, Paul Amato of Pennsylvania State University reported that 30 percent of adolescents living with single parents have repeated a grade, compared to 19 percent of adolescents living with married parents.[6] When it comes to keeping children on schedule academically, the intact family proves to be the most effective family structure. While at the University of North Carolina at Chapel Hill, Mark Regnerus found that “youth church participation positively affects both educational aspirations and achievement.”[7] Glen Elder of the University of North Carolina at Chapel Hill and Rand Conger of Iowa State University reported that adolescents who become more religiously involved in high school tend to score higher on academic competence indicators.[8] Regnerus, now at the University of Texas at Austin, and Elder also found that “church attendance exhibits a stable relationship with educational progress.”[9] As the data indicate, students who attend religious services at least monthly are more likely to excel academically and much less likely to repeat a grade.   [1] Most of the parents in the “biological parent and a stepparent” category are married. [2] “Other family configurations” also include children living with grandparent or other relatives. [3] Nicholas Zill, “Family Change and Student Achievement: What We Have Learned, What It Means for Schools,” in Family-School Links: How Do They Affect Educational Outcomes, eds. Alan Booth and Judith F. Dunn (Mahwah, N.J.: Lawrence Erlbaum, 1996): 139-174. [4] Robert S. Byrd, Michael Weitzman, and Peggy Auinger, “Increased Behavior Problems Associated with Delayed School Entry and Delayed School Progress,” Pediatrics, vol. 100 (1997): 654-661. [5] Hak-Ju Kim, “Family Resources and Children’s Academic Performance,” Children and Youth Services Review, vol. 26 (2004): 529-536. [6] Paul R. Amato, “The Impact of Family Formation Change on the Cognitive, Social, and Emotional Well-Being of the Next Generation,” The Future of Children, vol. 15 (2005): 75-96. [7] Mark D. Regnerus, “Shaping Schooling Success: Religious Socialization and Educational Outcomes in Metropolitan Public Schools,” Journal for the Scientific Study of Religion, vol. 39 (2000): 363-370. [8] Glen H. Elder Jr. and Rand D. Conger, Children of the Land (Chicago: University of Chicago Press, 2000), 159-160. [9] Mark D. Regnerus and Glen H. Elder Jr., “Staying on Track in School: Religious Influences in High- and Low-Risk Settings,” Journal for the Scientific Study of Religion, vol. 42 (2003): 633-649.    ]]>