Currently in First (Only) Marriage by Family Structure and Religious Practice

The 2002 cycle of the National Survey of Family Growth showed that, among adults aged 38 to 44,[1] those raised in an intact married family were most likely to be in their first (only) marriage. Family Structure: Fifty-three percent of ever-married women aged 38 to 44 who grew up in an intact married family were still in their first and only marriage at the time of the survey. They were followed by those raised by an always single parent (40.7 percent), those raised by a single divorced parent (36 percent), those in a married stepfamily (33.2 percent), and those in an intact cohabiting family (31.9 percent). Women raised in a cohabiting stepfamily were least likely (24 percent) to be in their first marriage. [2] 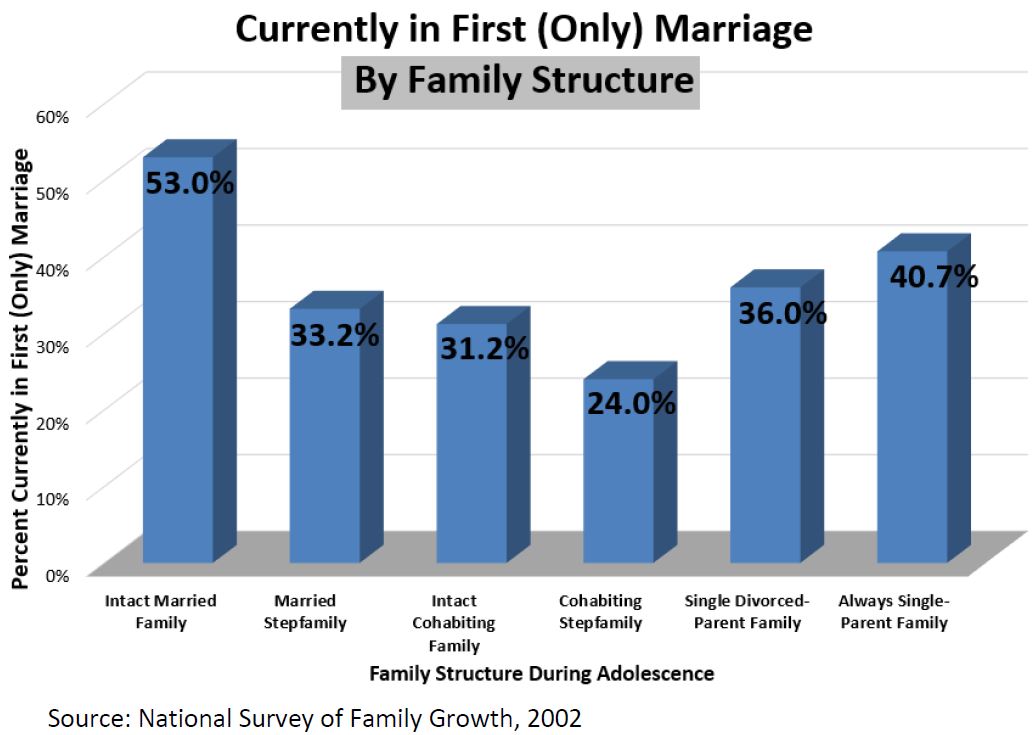 Religious Practice: At the time of the survey, more women raised in any religious tradition were in their first (only) marriage (47.2 percent) than women who were raised with no religion (42.7 percent). However this is a particularly weak measure of religion and the small difference between the two is not surprising. 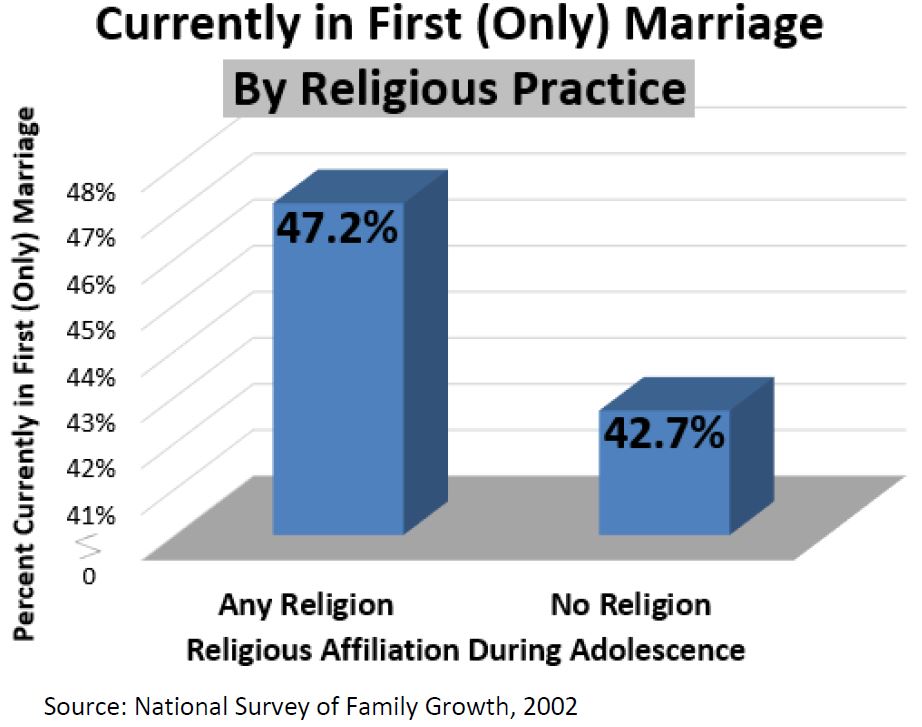 Related Insights from Other Studies: One 1992 analysis found that respondents from non-divorced parent families and from intact families (with both their biological mother and father) were more likely than those from divorced-parent families to “agree that it is better to marry, that marriage is for a lifetime, and that children are better off with their biological parents.”[3] Another study from the nineties analyzing married couples found that “[r]eligiosity inheritance is enhanced if offspring are raised by both biological parents who have high marital happiness,” whereas children raised in stepfamilies tended as adults to be less religious.[4] A 1992 analysis of a longitudinal study of white mothers in the Detroit area and their children indicated that having only cohabited over the previous five years had a pronounced negative effect on religious attendance, whereas marriage without prior cohabitation had a positive effect on religious attendance.   [1] This age band was selected because tracking family structure is difficult, but the arrangement of the family is more settled (in aggregate, on a national level) around ages 38 to 44. [2] These charts draw on data collected by the National Survey of Family Growth, 2002 [3] Katherine Trent and Scott J. South, “Sociodemographic Status, Parental Background, Childhood Family Structure, and Attitudes toward Family Formation,” Journal of Marriage and Family 54, no. 2 (1992): 427-439. [4] S.M. Myers, “An interactive model of religiosity inheritance: The importance of family context,” American Sociological Review 61 (1996): 858-866.]]>